This property had a gas meter that, in my opinion, was so poorly located on the property, it was a potential danger. However, the family thought I was wasting money.  They were just used to it being right there....next to the house EMBEDDED IN A NARROW DRIVEWAY where a car could easily hit it.  The meter was SO poorly located that when my mother-in-law moved out of the house and renters moved in, my husband did have concrete pillars installed on either side of it to try to protect it. Yeah, good thing because the pillars were hit more than once.


Like many things, I had a fight on my hands.  But it was a fight I was not going to lose.  Because if I lost it, we could die.  It MUST move.  And MOVE it did.

Now, to move a gas meter, you have to solicit the help of your local gas utility company.  This is NOT a DIY proposition.  Call the professionals.  Pay the money.  Just do it.  I believe I got lucky with my request.  I was charged under $1000 to have this done.  Granted, I was installing all gas appliances, 2 gas furnaces etc., so I was a great risk since I was a good gas customer.

From the images below, you can see it was a BFD. Not only did the gas meter have to move, but in order to move it, they had to change the tap across the street.  That was where the main trunk line to our house began.  There was something about changing the black pipe out because of new codes...I'm not sure.  I was all for the change so we wouldn't blow up.  In addition to all of this, the gas service had to run to the opposite side of the house because our upstairs furnace would need access to it. Lucky for us, my in-laws had run gas over there to a fireplace that exists on that side of the house.  So the HVAC contractors just had to tap the line on that side.

The guys in the picture below are standing over the meter in its old location.  Those two windows to the left of them are the windows to the carport shed where the furnace for the downstairs area was to be located.  Remember, this is a split level house.  There are two attics.  The attic seen here, then the elevated attic on the other side of the house.

There is some coordination with the HVAC company installing the new system.  The HVAC system can be installed, so waiting for the meter to move didn't hold them up.  But completion can be delayed if you don't coordinate this right. 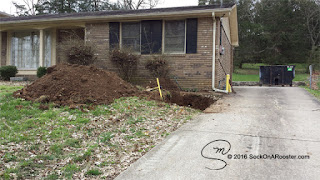 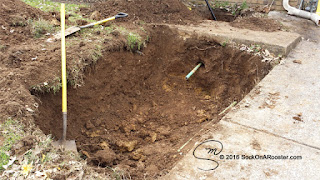 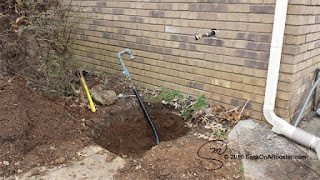 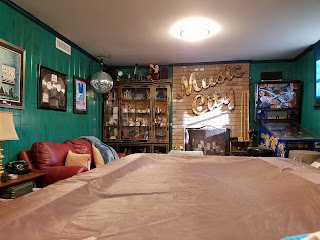 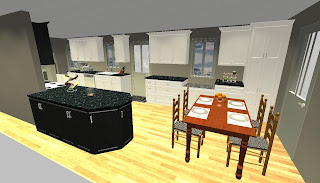 Kitchen Designers: I'm not one and I don't even play one on TV